February 2016: Spring Arbor Free Methodist Church had a team of 14 people plus a few other individuals that worked in Haiti in February 2016.  Block was laid for the walls of the building that will house the generators.  The trench was dug for the wall on the back side of the property.  The wall was started as columns were set and rock was set up to the ground level in one area.  The floor was poured and the metal frame was set for a multi-functional open pavilion. There was a rental company found less than a half a mile away from the property, so we were able to rent heavy equipment to move dirt, work on road accessibility, and grade off building areas, and dig footings for some of the security walls.  One of the pastors taught at the Bible College in Port au Prince each day.  The group also provided stories and crafts during Bible School for the children at the site.  The week also brought employment to several people from Port au Prince as well as the local neighborhoods in Tabarre.  God answered prayers and granted safety and a great experience for all.

January 2016: The Wabash FOHO team of 12 people enjoyed a safe and productive work trip January 13 through January 29, 2016. The three separate areas of the new compound we worked on were the caretaker’s house, the generator building and the security wall.
In October 2015 the Illinois team from Sumner/Bridgeport area had started the caretaker house, getting the retaining wall, floors, posts and some walls installed. The Wabash Team continued this house project building the trusses, purloins and installing the roof. We also poured a porch floor and constructed a septic system and leach field system for the drains coming out of this 24’ X 24’ house.
The second major accomplishment was constructing floor, posts, trusses, and roof for the 16’ X 48’ generator building. This generator building is located at the very east end of this triangle shaped lot. Eventually this building will house two big generators, a large fuel tank and the switching mechanisms to power the entire compound.
When our Haitian brothers were not helping us pour concrete they were starting the security wall on the West side of the compound. With a trench 4’ deep and 2’ wide made of concrete and fieldstone with columns every 12’ this wall will be here when we are long gone.
Our Haitian crew was dedicated hard working guys who were glad to have the work. This new compound will be a blessing for the numerous future teams that will continue to help the Haitians to help themselves.
It will be exciting in Heaven to meet the many Haitian brothers and sisters who have and will in the future make Jesus their Lord and Savior.

October 2015: A team of six from the Island Free Methodist Church, Sumner IL led by Mike Richardville and a team of 7 from Holland Free Methodist Church, Holland OH led by John Ringer arrived at Port Au Prince Haiti to begin the project of building a Caretaker’s house on the property recently acquired by FOHO.
The first morning the teams along with several Hatians picked up where the previous teams left off, completing the footers of the building and building a large retaining wall facing the river. Trusses, clips and corner posts were welded off site and trucked to the building site. Soon they were laying block for the exterior walls and the interior walls of a two bedroom, one bath, combined kitchen and gathering area home. Next the plumbing and the pouring of the cement floors took place. While the men were working on the house, the women of the teams were back at the Apartment preparing the meals for us and making bags of rice to hand out to the children to take home to their families. For many, that was the only food they had to eat that day.
Looking back, the team could barely believe they were able to accomplish all this in less than nine days. There was no doubt the Lord’s hands were on each of them and everything they touched. The impact of feeling such a strong presence of the Lord, humbled them beyond words. In the evenings they would sit and drink it all in. Perhaps this closeness to the Lord is what entices them to go for that first trip to Haiti and upon experiencing it brings us all back to continue the Lord’s work.

January 2014: A team from the Wabash Conference, lead by Danny Dennis, built a new front wall 15’ in from the current wall. The surviving balcony will be extended forward, side balconies added, and outside stairways added to access the new balconies. AND, there will now be more seating available than before the demoliton! God is good all the time! Restrooms and  fencing will need to be rebuilt.2/3 of the  National office/bookstore and depot was demolished. Another incoming team is needed to remodel, enlarge and rebuild the offices, bookstores, etc.  Do you have a group of mission-hearted people who would love to work alongside Haitians to rebuild their church? If so, contact us!

February 2014: A Spring Arbor, MI team was in Haiti February 2-13, 2014. Led by Phil Beemer, the team worked on the new balcony at Parc Chretien while in PaP. This team spent most of their time at Fond des Negres (located on the peninsula that juts out west of PaP), where they began construction of a unique and beautiful church. This congregation has been waiting for a new building for 20 years! The church is being built on a hillside with wide steps in an arc facing the pulpit.  It is an open-air church and the seating will be arranged on each step so that every seat has a good view of the platform with a roof for shade and open air for a nice breeze!  After 20 years of waiting for a church that holds their entire congregation, we want to finish their church before beginning work on a new FOHO site. Would you like to be part of a team working side-by-side with Haitian brothers to finish the Fond des Negres church? 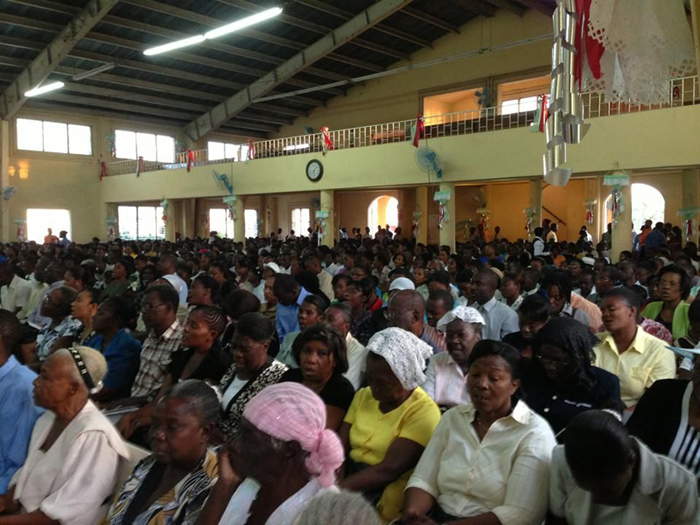 FOHO Missions has found over the years that, within a few months, a newly-built church will double or triple attendance. This is exciting information for the FOHO team. It validates our long-held approach to missions in Haiti. The Haitian people are wonderful at winning souls to Jesus and walking alongside new Christians. What is hard for them is construction of worship centers and schools.  Since 1974, FOHO Missions has been walking alongside our Haitian brothers and sisters by building schools and churches to enable them to grow relationships and godly, Christian men and women.